Involvement of stakeholders: experiences of the Soil4Wine LIFE + project

The Soil4Wine LIFE+ project implies the involvement of Demo farmers and Living labs for the development of a specific decision-making tool (DSS) to support the winemakers that will allow to identify the nature and gravity of the problems at the soil level and will suggest the most effective solutions aiming to increase sustainability.

The application of innovative models for sustainable agriculture, such as the one envisaged by the project, requires the involvement of local stakeholders through a participatory and promotional approach; their contribution is in fact important to create a local identity, to support development and social cohesion and to maintain the natural and cultural resources that in many cases depend precisely on small producers and farmers who manage the territory.

During the first phase of the project the Demo farms were involved, nine wineries that carry out their activities totally or partially within the territories of four protected areas managed by the Parchi del Ducato: Parco dei Boschi di Carrega, Parco del Taro, Parco del Trebbia and Parco dello Stirone and Piacenziano, in the provinces of Parma and Piacenza. These wineries have been directly involved in the definition, use and validation of a "decision tool" (DSS) developed by the Catholic University of the Sacred Heart (UCSC) and Horta, to optimize the management of the vineyard soil and favor the expression and the subsequent measurement of ecosystem services related to it.

In order to arrive to arrive to the definition of the DSS the 4 meetings were held, carried out with the involvement of a facilitator and the interventions of the project partners (Catholic University of the Sacred Heart, Horta, Parchi del Ducato and ART-ER), focused the problems of soil management in the vineyard, the possible solutions in relation to the improvement of production and the conservation of biodiversity in the soil as a positive factor. During the last meeting, the experimental version of the DSS was discussed, evaluated for the purposes and methods of use in the respective company vineyards.

At the same time, in order to deepen the topics covered by the project, training and dissemination meetings were held, addressed to the Demo farms and Living Labs, which investigated the state of health of agricultural soils, their management and the problems related to it.

In the second phase, the project encouraged the involvement of a wider audience of stakeholders. First of all, 24 wineries in the territory of the Protected Areas (Living Labs) have participated as the external validators of the DSS, then agronomists and administrators invited to make field visits at the vineyards of the Demo farms, view the action plan elaborated through the use of the DSS and the consequent different soil management solutions put in action in relation to the characteristics of the soils of every winery.

During 2019, the DSS will be further validated in around 40 wineries throughout Europe, in order to assess the transferability and repeatability of the methods and techniques proposed and will also be presented at events and trade fairs, both locally and internationally. 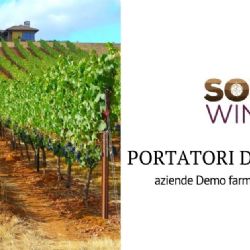